In the face of climate emergency, the matter of enacting change is no longer deferrable to the future. As wasteful human lifestyles need to change, a number of different approaches rooted in sentiments of guilt, denial, anger and flight, fail to enact real change. Based on the assumption that the future is a future of scarcity, the question is how to create a spirit that allows scarcity to be viewed as an opportunity.
Analyzing and discussing different approaches that represent coping-mechanisms for an omnipresent crisis, none of the aforementioned approaches seems to have proven most successful so far. Based on modes of solutionism, control, moralisation, and ignorance, all existing approaches fail to produce the necessary spirit for positive change, and instead, perpetuate problematic behaviours and deepening polarization and antagonism. As a conclusion, the attitude to changing needs to change. Instead of considering the scarcity ahead being based on suffering and inconvenience, it ought to be approached through pleasure.
Considering the potential of collective approaches, this work proposes an approach of creating collective pleasure in scarcity, as a base for the creation of a collective spirit to change. Functional objects based on a materiality of scarcity, therefore, create pleasurable moments that encourage togetherness as a first step towards breaking down borders and reducing antagonism. As well as communicating their inherent values, by embracing pleasure in scarcity they create a needed spirit for a novel way of life that embraces change as an opportunity, instead of fearing it. 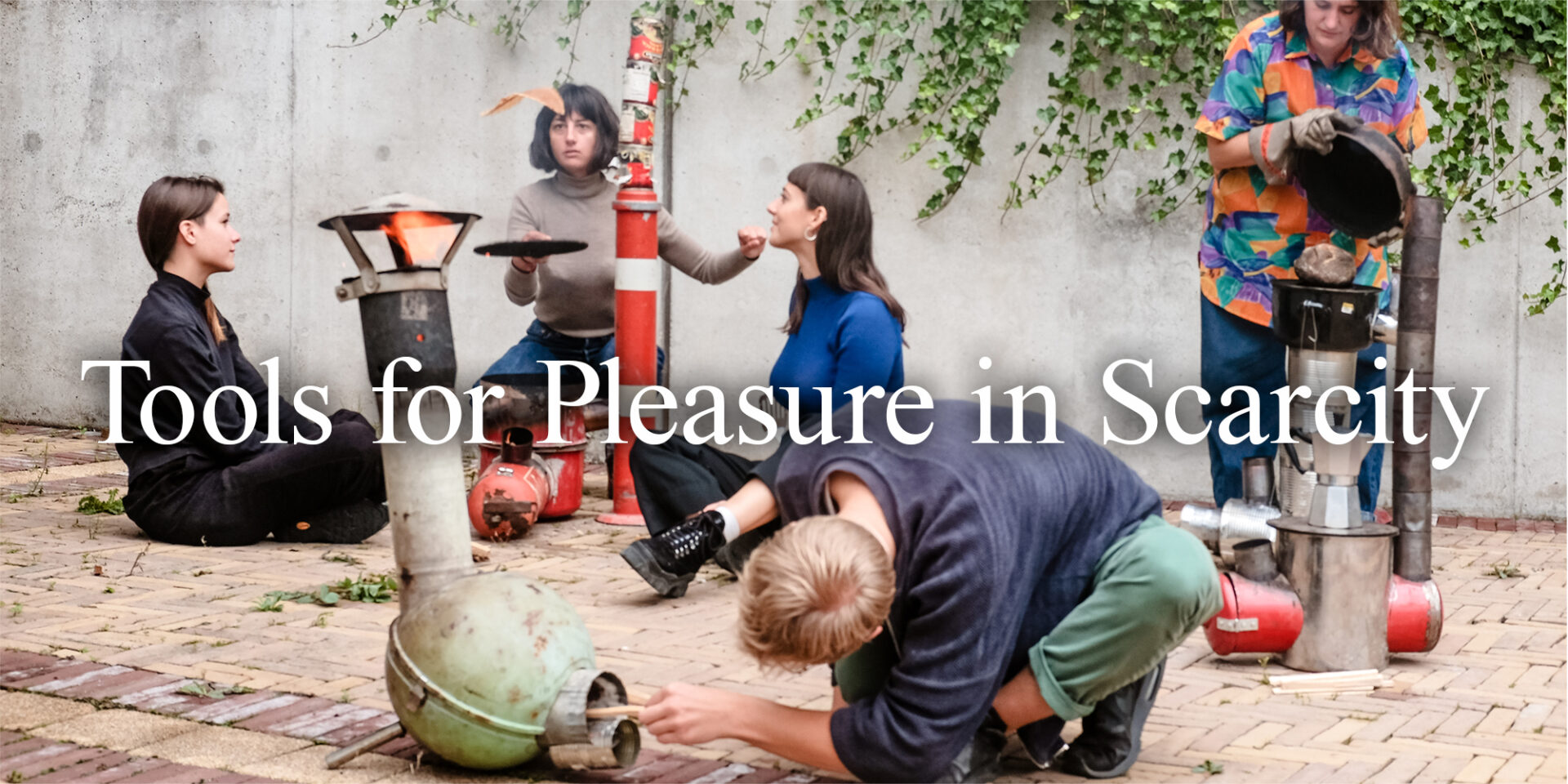 Electric energy is an abstract concept materialised only in increasingly hidden power infrastructure. Hiding away the only remnants that link energy use to its production allows us to ignore the material reality of energy production. Electricity gets produced through electric generators, powered with huge turbines driven by force created mostly by the combustion of fossil fuels like coal. Energy gets produced in power plants far away from where it is being used, fed into the power grid that connects virtually every dwelling. When turning a switch, we tap into the flow of electrons that we call electricity. The stability of that flow relies on the balance of energy production and consumption. That means, the moment you turn on the light, somewhere far away, an electric generator has to make a few extra rounds exclusively for you.

Material reality of the Internet

Just like electricity, the Internet consists of a material reality. Whereas it is perceived as an immaterial “cloud”, it relies on energy and a constantly growing network infrastructure of data centres, submarine cables, and a growing number of user electronics, forming “the Internet”. Every byte transmitted through that network infrastructure is an electric signal. That means, the amount of data traffic on the Internet directly relates to the amount of energy consumed. In simple terms, the bigger a file, website, video, etc., the more energy is needed to access it. Its material infrastructure, an increase in data traffic and connected devices, together with increasingly resource-intensive content, make the Internet three times more energy-intensive “than all wind and solar power sources worldwide can provide.” (De Decker, 2018b)

Renewable energy sources are not capable of producing enough energy at all times and conditions, to serve the current needs we have become accustomed to. The only way to (make the Internet fully compatible with renewable sources of energy is by choosing to self-impose limits. De Decker, 2015)

This website is hosted on a server that is locally powered through an off-the-grid solar system with its own energy storage. It is expected to stay online during bad weather conditions for 30 hours. During longer periods of bad weather, this website will go offline. It is located in Eindhoven, the Netherlands, with seasonally dependent daylight hours of between 7h51m and 16h38m. (Hoffmann, n.d.) On average, Eindhoven has an annual 1604h of sun on 305 days. (Ministerie van Infrastructuur en Milieu, 2011)

The system is charged through a 30W solar-module producing up to 100Wh per day, supplying a 260Ah lead-acid battery-module which can realistically serve a load of up to 120Wh when fully charged. The Raspberry Pi which hosts the website on a microSD card creates a load of 3 to 5 Watts (depending on the data traffic), requiring an average load of 96Wh per day. The measured power produced by the solar panels currently indicates a realistic maximum capacity of 18W and a realistic maximum production of 100Wh on a sunny day. Therefore the website is expected to go offline after a period of 30h of insufficient lighting. The availability of the website in winter will be less guaranteed than in summer, on top of that, the battery will be especially vulnerable to quick discharge on 60 days per year without sun.

The content on this website is informed by design decisions that limit and reduce data traffic. Because of limitations like image dithering, a static site, no external scripts or fonts loaded, the content can be accessed with a very reduced amount of traffic generated. Traffic on the website immediately consumes energy from the power source. By displaying system-data, the site leaves a choice to the visitor to adapt her behaviour accessing the site, regarding the availability of power. In moments of severe scarcity of energy, the visitor can help to keep the content online for a longer period of time by downloading a file for offline reading.

This format of a solar website is largely inspired and influenced by the solar website solar.lowtechmagazine.com. Its articles around building a lowtech server informed the design choices made, both, in terms of hardware and software.

Thanks to Botho this website come to life. Find his code for this static site on Github.